My son had anorexia. Martin's story 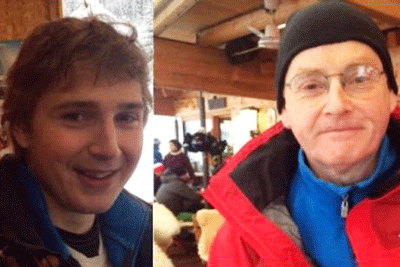 A personal story about impact of a condition on a family

Did you know that around 25% of people with eating disorders are young boys? I didn’t until my son Joe developed an eating disorder. We noticed he was losing weight and then it became clear he had a significant problem.

In addition to his severe weight loss, there was a major change in his personality and behaviour. The outgoing, bubbly boy we had known for 13 years became moody, argumentative and secretive. Joe was dealing with all the challenges that come with maturing into an adult, but what was happening was more than that, and a symptom of a whole range of other things.

As a logical person, you want to try and understand, asking yourself what is happening and why, but in reality, you just have to deal with what’s in front of you.

As a parent, you feel helpless

Joe's weight loss was life-threatening. He was admitted to intensive care for three months. It was hard for him and us as his family. Afterwards he went to a mental health unit for a short time. But he needed help seven days a week and they only opened Monday-Friday over lunchtimes. They were not geared up to meet his needs. In fact, it turned out they knew little about eating disorders.

As a parent, you feel helpless. You don’t know what to do. We had to focus on finding the right help for him and the system was baffling. Even for someone like me who had worked as an approved social worker, had managed mental health services and who knew some of ins and outs of the health services - including some of the people in charge!

We soon realised that we would have to be the ones doing the main support and we needed help to guide us. When someone in your family is ill, they can become the sole focus. It caused lots of issues in relationships across the family and our friends. They didn’t know how to interact with Joe. He in turn found it hard to accept support from others. He lost friends and become more and more isolated. Mealtimes, going out and family holidays were all a challenge. The behaviour of people with eating disorders can be totally irrational, highly emotional and controlling. You feel you are walking on eggshells.

During this time work was a refuge for me. Life there was relatively normal. It wasn’t something I went around telling people in work about endlessly, but I did let them know and they were there for me if I needed it. Friends and family were my main support.

Anorexia delayed Joe’s physical development (though he’s caught up now), he missed out on lots of school and many of the normal things teenagers do. Because of how negative he felt about himself, he rejected people and we, his family, became his only support network.

What helped most was group family therapy sessions. They took the focus off Joe and supported us all to work together to help him. And he had a psychiatrist who invested time in building up his self-worth, helping him to set goals and take steps towards recovery. We as his parents gave him unconditional love, but balanced that with setting firm boundaries. We supported and challenged him to address his behaviour.

You are not alone

I know there will be staff in our organisation who are going through the same thing with a loved one. Or staff dealing with an eating disorder themselves. Please know that you are not alone; that things can - and do - get better, but it’s hard work.

Many people don’t understand eating disorders, or mental health issues, and don’t know what to say or how to help. Equally, as a society, we struggle to tell people when we’ve got a problem. It can be seen as a sign of weakness. We cover it up. But people are often willing to help and listen.

It can take a lot of confidence for someone to admit they have a problem. If no-one asks after you, if people dance around it, that’s worse. Often people need help to take that first step. You can help by simply asking: “How are you today?” Joe is doing really well now, but it’s taken a long time and he’s slipped back a few times.

He understands what he needs to do to keep himself well. He eats really well, really healthily. In many ways, his relationship with food is very positive – he is in control. He loves to cook and has an Instagram account with loads of followers, where he shares images of the dishes he’s created. And in eight days’ time he finishes his Engineering degree.

He is living proof you can have a debilitating mental health issue and come out the other end. There is light at the end of the tunnel. And while I wouldn’t wish an eating disorder on anybody, my son is stronger today because of his experiences. He has learnt how to live and have a successful life.

What helped me cope