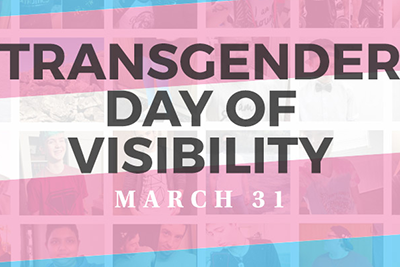 Today is the 12th annual International Transgender Day of Visibility, and it’s all about celebrating and promoting the resilience and success of transgender and gender non-conforming people. You can find out more about how and why the day was founded below along with links to other supporting events. But at the same time, raising awareness of transgender rights and the discrimination and challenges trans people commonly face remains of vital importance.

While trans people do technically have legal protections under the Equality Act 2010, in reality our society still has a very long way to go. The BBC recently noted that transphobic hate crime reports have quadrupled over the last five years. This is likely to be the tip of the transphobic iceberg, as the anti-violence LGBT+ charity Galop report showed that only 1 in 7 trans people who have experienced transphobia reported it. Despite employment legislation, it is unsurprising then that anti-trans discrimination has spilled over into the workplace. A 2018 Crossland survey found that 1 in 3 UK employers would not hire a transgender person, and Stonewall reports that half of all transgender workers are so concerned about discrimination that they hide their identity at work.

It’s clear then that legislation alone isn’t enough; change has to happen on all levels of society, and we as employers need to actively contribute to that. One of SCIE’s core values is inclusion, which means working together for equality, diversity, and fairness. Not just because the evidence shows that increased diversity makes us more productive, innovative, and better equipped to have a positive impact on people’s lives – more than that, it is simply the right thing to do. We need to go above and beyond the minimum requirements of the law and be actively welcoming to everyone, but especially to trans people at a time when the dangers facing those who are openly trans are at an all-time high. As an inclusive employer, we want to listen and learn from the unique experiences and perspectives of trans people, amplify trans voices, and be allies to our trans colleagues in their journey with us.

Our Equality, Diversity and Inclusivity (EDI) Group has been talking about how to ensure we are truly supportive of our trans colleagues, and today we’re proud to launch our Trans Inclusive Policy. This is based on guidance from Inclusive Employers and Stonewall, and clearly sets out how we will ensure SCIE is a safe and welcoming workplace. It also outlines the expectations of and guidance for managers, and the support framework in place for trans employees. As we always set out to ensure that the voices of those our guidance is about are included in its creation, this policy has also been co-produced with trans colleagues.

Of course, having a policy isn’t enough by itself. This is just the one small step by a small organisation – but it’s an important one, and we hope that others will join us.