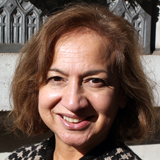 Have you seen SCIE’s videos on the Mental Capacity Act? I find one in particular quite astonishing. Former Eastenders star Leonard Fenton plays a rather irritated man. It could easily be my dad – perhaps even me in a few years' time. The character wants to spend £50 on lottery tickets. His home care worker is, at first, reluctant, but eventually gives in. Come Saturday night when the numbers are being called, days of misery give way to moments of absolute joy as the man checks - and organises - his tickets.

We never find out if he wins anything. That’s not the point. What does matter is that he decides for himself how he spends his time and his money. It’s about respecting the right of people to make what might be seen as unwise decisions.

Gosh, how much harder is that to do than it sounds? Balancing safety and respect is difficult enough for professionals, but for the rest of us, the overwhelming instinct is usually to protect. Living longer has consequences for family, friends and peers and we are, as yet, distinctly unprepared.

Frankly, most of us just aren’t used to relating to adults with diminishing mental or physical capacity. Until quite recently, people were ‘looked after’ in detached institutions. If that was ever good enough for some people, it certainly isn’t for loved ones, now. But in aspiring for more, one challenge is to ensure we don’t either over-protect, or smother people with so much care that their personal will is stifled. In order to respect dignity, we have to learn not to project our perceptions of wellbeing onto others, but to understand what people want for themselves. This requires skill.

Nurses can refer to what is known as ‘professional curiosity’, to engage with people to find out more about them. It assists them in knowing when to administer care - and when to step back. It enables them to be aware of broader circumstances that impact on health. It is facilitated by ‘reciprocal engagement’; that is, building interaction in the relationship rather than relying on one-way transactions. Being able to draw out information from people in a deliberate and iterative way helps establish a more reliable picture of their own gifts, wishes and interests.

With care increasingly drawn into community settings rather than being held in impervious institutions, each of us shares responsibilities for respecting dignity; not just to loved ones, but to those we come into contact with on a day-to-day basis. In the halcyon days when communities were less atomised, nosey neighbours probed and pried into everybody’s business. Arguably, their curiosity was driven by their own significance rather than altruism.

So, bringing back nosiness isn’t the answer. But, what is called for is a conscious effort to generate a culture at neighbourhood level, where purposeful and disciplined engagement is normal, not intrusive. Just as we encourage the take-up of health and safety skills in schools and workplaces, perhaps there is a case for people to learn reciprocal engagement.

Respecting the rights of people to make decisions is a skill that requires encouragement. Just like the home care worker who concludes that, yes, the character played by Leonard Fenton, can indeed buy lottery tickets irrespective of whether we think it wise or unwise.

Sukhvinder Kaur-Stubbs is MD of Engage-Us, which next week launches its report on Building Contingent Capacity. This establishes new tools to help organisations incorporate personalisation and co-production in the design delivery and accountability of their service.