Thank you for the music: the role that singing can play in supporting someone with dementia 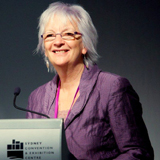 "Music offers people a chance to express themselves in different ways, less reliant on words."

Using music appropriately can lead to an improvement in reality orientation, memory recall and social behaviour. As other experiences become confusing and communication becomes difficult, the role and experience of music becomes even more important.

Music stays with us long after speech and other skills have gone. People with dementia, who have perhaps lost the ability to speak coherently or even at all, can sometimes sing an entire song perfectly.

One of the important aspects of supporting people with dementia is to minimise the impact of their losses and to play to their strengths. If people can sing then we should be encouraging this, helping them to maintain the skill and the sense of achievement and joy that goes with that.

As a young woman, Kate sang in a band and continued to sing throughout her life. Her dementia was at a stage that conversation was limited and she did not sing at all. Kate had been coming to our singing group for a few weeks. She rarely sang, but did smile a great deal. One day the singing leader brought hats in; these resembled the hats worn by the Andrews Sisters (This was the era when Kate was singing in the Band.) The leader offered the hats out to anyone who might want to wear them whilst we sang "Don't sit under the Apple tree."

Kate took a hat and started to sing and slowly parade around the hall. She started to ‘perform’. It seemed that the song and the hats triggered memories. She even took a bow at the end of her 'performance'.

It would be foolish to pretend that music always leads to such dramatic events. My own experience is, however, that many such events occur, some not as dramatic as in Kate’s case, but they can still be very important to the person involved. Even if the person with dementia forgets that they were singing soon after the event, this does not negate its worth. They will still probably feel good even if they cannot remember why.

In recognition of the obstacles and to encourage the development of singing groups I’ve written a book which looks at issues such as which songs to choose, how to structure sessions and finding funding for your group. I also print out some sample sessions, to get you going.

I think that every home and community should have a singing group because they really can benefit people with dementia. Singing in groups, such as the one I run, can help our sense of belonging, and can enable us to do something that is joyful. It can awaken our connection to the world and our history and this is just as true for people with dementia.

For Diana’s book, please search "Singing Groups for People with Dementia: A Guide to Setting Up and Running Groups in Community and Residential Settings."