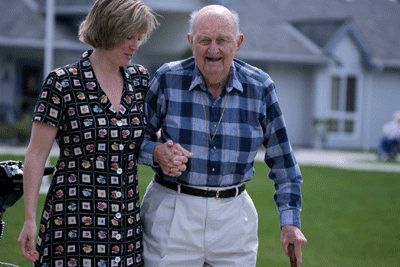 IMPACTAgewell® aims to improve quality of life for older people by connecting them to their community. It goes beyond the traditional signposting model, instead building in a funding stream to actually invest in the community-based, often volunteer-led, organisations which deliver these services (commonly referred to as ‘social prescriptions’) such as befriending, transport, luncheon clubs and handyperson services.

Older people who are eligible to take part in the programme can submit an expression of interest or be referred to the programme by their GP. (Participants must be aged 65 years or older; have a long-term health condition; live alone or with another person over 60; registered with one of six GP practices in Mid and East Antrim area.) An IMPACTAgewell® Project Officer will arrange an initial home visit to meet the older person where they are given support to co-produce their personalised health and wellbeing action plan. 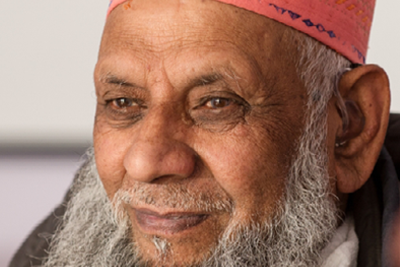 The Project Officer will try to connect the older person with a range of community/voluntary organisations that have signed up to the programme and help them to identify goals and actions that will keep them connected in the community over a six-month period. The model – which is led by local charity the Mid and East Antrim Agewell Partnership (MEAAP) – has been co-produced and is being delivered in collaboration with health care practitioners thanks to funding support from Dunhill Medical Trust.

In many cases we are de-medicalising the problems that have been labelled as clinical, problems like depression, medicine adherence, health literacy, and instead are freeing up patients to be people again, and to find the solutions within themselves or with their neighbours – recognising their assets as opposed to their liabilities.

An initial cost–benefit analysis has been undertaken on baseline data, this found that the potential fiscal return on investment (FROI) at the end of year 1 was 2.8. That is, for every £1 spent on IMPACTAgewell® there is a potential cost saving of £2.80 through things such as reductions in visits to GP services, reduced need for community care and for prescriptions.

Barriers and enablers for expansion

IMPACTAgewell® has expanded the pilot area beyond the original six GP practices to help increase the level of uptake of referrals, and already has five new GP practices signed up, with a bi-monthly IMPACTAgewell® locality hub approach now being trialled.

The referral criteria is also being reviewed, with the potential of introducing ‘frailty’, which is deemed to be either ‘mild’ or ‘recoverable’ as a long-term health condition for referral purposes. This has been difficult to date as there is no agreed method within primary care in terms of measuring or grading ‘frailty’.

IMPACTAgewell® has struggled to identify potential service users, with 191 (49 per cent) either declining the offer of support following referral stating ‘enough support’, or considered unsuitable for the programme. There are no central service user records with basic health information and very little information on living circumstances and family support unless the older person has been seen by a social work team.

IMPACTAgewell® also recently launched a short film featuring two clients talking about their experience of being involved in the programme. Four local events were also held in summer 2018 as part of the NHS 70th Birthday Celebrations to encourage peer-to-peer networking.

Getting community and voluntary organisations to sign up to the partnership has also been a challenge. Many of the community/voluntary groups locally have low capacity hence are wary of taking ‘unrestricted funds’.

Many of the partners involved in the project have spent much time networking and disseminating information. MEAAP has had a very active Twitter presence (@meaapni #IMPACTAgewell) and have been using this social media tool to network far and wide. Presentations by partners have most recently included the 1st International Social Prescribing Research Conference in June 2018, the Big Lottery Fund UK in September 2018 and the WHO International Healthy Cities Conference in October 2018.

PACT Community Pharmacy also won their first award from the Ulster Chemists Association for their population health model utilised and first piloted as part of IMPACTAgewell® in January 2018 and were shortlisted for Pharmacy Team of the Year at the UK Chemist and Druggist Awards hosted in London in July 2018.

As noted above, MEAAP and many of the partners involved in the IMPACTAgewell® Programme have taken every opportunity to interact and influence similar organisations/projects involved in multidisciplinary team approaches, in social prescribing, in co-design and co-production, as well as innovation and quality improvement. 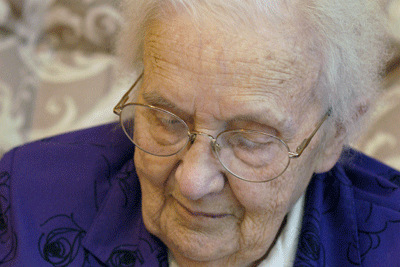 Emily, 89, lives alone in her own home. She was referred by her GP as she has several long-term health conditions including heart failure and hypertension, as well as having hearing problems and using a walking stick. She wanted to get out more to attend local activities, but did not have access to transport

The IMPACTAgewell® Project Officer supported her to attend a local luncheon club making use of a local community transport scheme. She was also referred to a hearing clinic and other health services.

Emily is more active in her local community and less lonely.