This Highlights briefing is a case study commissioned by the NHS Leadership Academy of the impact of two innovative programmes which aim to develop systems leaders and place-based, collaborative forms of leadership: Frimley 2020 Leadership Programme and Leaders in Greater Manchester. The learning from the case study will inform the development of its national and local programmes to help leadership grow in integrated care systems (ICSs) and other systems-wide approaches in health and social care.

The NHS Long Term Plan sets out plans for every area in England to be covered by ICSs – collaborations between NHS organisations and partners to improve population health – by April 2021.

Leadership in this context will need to be both collaborative – with leaders leading across organisational and professional boundaries – but also focused on the distinct needs of local places and their populations.

Research by SCIE for the NHS Leadership Academy found that the leaders of the future will need to be adept systems leaders, skilled at: 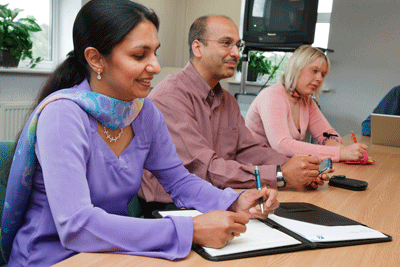 Leadership in this context will need to be both collaborative – with leaders leading across organisational and professional boundaries – but also focused on the distinct needs of local places and their populations.

The two programmes have several features in common. They both:

However, there are also a number of areas where the programmes are different. 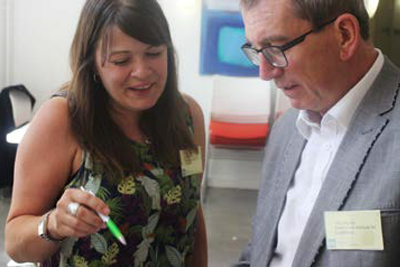 Both programmes are rooted in their local distinctive contexts. In Frimley, the programme is about enabling the delivery and development of the integrated care system, the scope of which is health, including public health, and care, largely social care for adults and older people. The leaders and the participants have backgrounds in clinical practice in primary and secondary care, in allied health professions, NHS and public health management, and in local authority social care. The change challenges focus on issues across this landscape, including more focused services for frail older people, better transfers from residential care to hospital, and swifter processes at the A&E front door.

In Greater Manchester, the programme is anchored in the Greater Manchester Strategy, which covers all public services. Leaders, facilitators and participants were drawn from a wider range of organisations, including adult social care, children’s services, housing and strategy teams from the local authority, housing associations, the police force, probation and youth offending teams, and voluntary sector organisations, as well as those working in health services. The place-based challenges reflected the wider scope, including, for example, offender rehabilitation, early help for children and families and preventing homelessness, as well as those more linked to health and care such as reducing loneliness among older people and improving support for carers.

The two programmes also had some distinctive features – for example the Frimley programme included visits to ‘inspiring venues’, often accompanied by talks by high-profile leaders in that organisation. The Greater Manchester programme had as a secondary objective the building of a cadre of organisational development professionals who would continue to support leadership and management development across the Greater Manchester area as a whole. 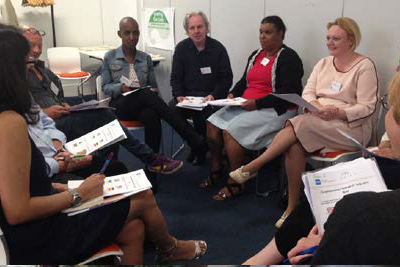 Both programmes had an impact that reflected the mixed and multi-level objectives, with participants saying that they had grown as leaders, learnt valuable skills and tools that they were using in their work, and had seen changes start to happen in their workplace or locality. Both groups of participants reported feeling more confident to lead change and developing a sense that they had the personal authority, agency and permission to take the initiative in leading local change. The Frimley participant who said ‘I realised that it’s in your gift to make things different’, and the title of the LiGM closing event ‘We are the people we have been waiting for’ illustrate this point.

Less positively, neither programme was able to evidence whether the larger-scale objectives (at population or Greater Manchester level) had been met. It is not clear whether any of the programme evaluations that are being conducted will address this issue, or how it could be assessed effectively in such complex and dynamic local systems.

There were also differences. Frimley participants talked more about developing their personal confidence to lead change, and the impact that the programme had made on their personal working style. They described the programme as a catalyst for the change challenges, which would probably have happened anyway, if much more slowly. One interviewee said that she had already recommended the next programme to a colleague.

Both programmes had an impact that reflected the mixed and multi-level objectives, with participants saying that they had grown as leaders, learnt valuable skills and tools that they were using in their work, and had seen changes start to happen in their workplace or locality.

The LiGM participants talked more about the value of getting to know other professionals who worked in their locality, and the impact of ‘leaving your lanyard at the door’ and ‘bringing your whole self to work’. For them the personal growth was framed as changing how they saw themselves and others in relation to their place.

Several issues arise from reviewing these two programmes alongside each other.

The Social Care Institute for Excellence improves the lives of people of all ages by co-producing, sharing, and supporting the use of the best available knowledge and evidence about what works in practice.

We are a leading improvement support agency and an independent charity working with organisations that support adults, families and children across the UK. We also work closely with related services such as health care and housing.

Find out more about SCIE support in integration.

About the NHS Leadership Academy

The NHS Leadership Academy seeks to equip people with the skills for systems leadership and place-based leadership. We support this aim through a mix of core programmes and more localised menu of ‘in place’ interventions and funding. Now part of NHS England and NHS Improvement, the Leadership Academy aims to support the leadership and talent management requirements of the NHS Long Term Plan, including the development of systems leaders and place-based approaches to working.

Total Transformation of care, including 13 blogs from loneliness to home care

From place-based to place-led