Co-production in social care: what it is and how to do it – At a glance

This At a glance briefing summarises SCIE's guide ‘Co-production in social care’ and has been developed in partnership with Think Local Act Personal (TLAP). Co-production is a key concept in the development of public services. It has the potential to make an important contribution to all of the big challenges that face social care services. Co-production can support:

A key lesson of the Francis, and the Winterbourne View Inquiries is that service providers need to develop more equal partnerships with people who use services and carers.

The Care Act 2014 is one of the first pieces of legislation to specifically include the concept of co-production in it’s statutory guidance. The guidance defines co-production and suggests that it should be a key part of implementing the Care Act.

In its simplest essence, to co-produce is to make something together. Co-production is not just a word, it's not just a concept, it is a meeting of minds coming together to find shared solutions.

People are equal partners and able to share power.

Co-production is about developing more equal partnerships between people who use services, carers and professionals.

Co-production can be a slippery concept and if it is not clearly defined there is a danger that its meaning is diluted and its potential to transform services is reduced. At the same time, a definition that is too narrow can stifle creativity and decrease innovation. Definitions and language are important but the move toward co-production needs to be more than just a change in words. There is a danger of wrongly assuming that the right words will be followed by the right actions.

'Co-production is a relationship where professionals and citizens share power to plan and deliver support together, recognising that both have vital contributions to make in order to improve quality of life for people and communities.'

‘"Co-production" is when an individual influences the support and services received, or when groups of people get together to influence the way that services are designed, commissioned and delivered.'

SCIE defines co-production as 'people who use services and carers working with professionals in equal partnerships towards shared goals'.

The range of definitions and the use of terms such as ‘co-creation' and ‘co-design' can be bewildering. However, there are a few things we can say with some certainty about what transformative co-production is about:

It may be useful to approach co-production as a set of values. The following principles of equality, diversity, accessibility and reciprocity are critical values for putting co-production into action.

Equality – everyone has assets

Co-production starts from the idea that no one group or person is more important than anyone else and everyone has skills, abilities and time to contribute.

Co-production should be as inclusive and diverse as possible. Particular efforts may be needed to ensure that seldom heard groups are included.

Making everything accessible is the way to ensure that everyone has an equal opportunity to participate fully in an activity in the way that suits them best.

Reciprocity means people get something back for putting something in.

There are formal ways of doing this, like using time banks as a way of rewarding people, but sometimes the reciprocity comes from the more equal relationships that develop between people and organisations.

Costs and benefits of co-production

How to do co-production

When looking at how to do co-production, it is helpful to think about organisations being like a jigsaw with four pieces.

For co-production to work effectively, change will need to happen in each piece of the jigsaw. 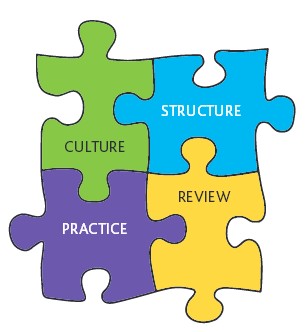 Islington Council has developed a Framework for Involvement in Adult Social Care to provide a solid base for co-production that is accessible, inclusive and impactful.

This includes a reward and recognition policy that covers payment at London Living Wage, a flexible approach to access expenses, individual support with benefits issues, and optional donations to service user and carer groups. Co-producing the policy has made it possible to find solutions to the challenges involved in rewarding service users and carers who work with the council.

Organisations' cultures are the beliefs and values that shape them and the way they work.

To co-produce, organisations need to:

I want to be fully involved as soon as the idea blossoms. Asking me for my opinion once the idea is set means that I can't influence the agenda.

I need the right support so that I can be fully involved and included. I want to be asked for my views even if it takes more time to involve me.

To achieve co-production, the organisation structure and systems need to:

Birmingham City Council’s People Directorate (Adult services) is one of TLAP’s Making it Real* sites. It has developed a range of structures to support co-production work with citizens.

* Organisations who are willing to co-produce three priorities with people who use services and carers can access further information through TLAP's Making it Real website.

Organisations and their staff support co-production by:

All Together Now is a project working with people with dementia living in residential homes in Swansea. Using co-productive approaches has meant that staff roles sometimes changed, for example, kitchen staff began to cook with people rather than cooking for them.

Organisations need to monitor their processes and outcomes by:

New Belongings is a national co-produced programme which works with local authorities to improve support for care leavers. Its work in Cheshire highlights the importance of approaching co-production as an evolving process with people who use services involved in all aspects including monitoring. A key lesson is that everyone needs to be willing to learn and not everything will work the first time.