How to do co-production - Practice

Making co-production happen in practice is about all those who are involved in the process – who may have different perspectives – working together to achieve agreed aims. This means building relationships. In several of the practice examples this was described as developing the conversation.

It is important to make sure that people who use services attend all co-production meetings. This will help new working relationships to develop. It will also help with the shift in power that is involved in transformative co-production. [24] It will also be helpful if people who use services are given opportunities to meet on their own to talk about and agree their priorities.

This is reflected in the concept of the ‘relational state’. [68] Public services and governments need to be based on a relationship approach, with the devolution of power at all levels, so that people have power as well as responsibility. An important part of this concept is the idea that governments and service providers need to trust citizens and people who use services.

Access is a fundamental issue in any type of work with people who use services and carers. It is a cornerstone of equality. Co-production cannot happen if processes and practices are not accessible.

SCIE has produced a thorough guide to holding accessible meetings and events. [22]

Care may need to be taken to make sure that the person chosen for this role is acceptable to everyone concerned.

Taking action to develop or utilise the capacity of the constituent community, the people living in a particular area or the users/potential users of a specific service to take part in co-production is crucial to its success.

The need to build the capacity for co-production in wider communities was a particular concern of the Project Advisory Group. It links particularly to issues of funding and making sure that user and community organisations have enough resources to actively support co-production. The Project Advisory Group saw working with organisations run by people who use services as essential to co-production and the empowerment of people who use services.

It may be useful to map the assets and resources in a community rather than just looking at problems and needs. [15] Where a community does not have the capacity to develop co-production, it would be necessary to identify exactly what capacities are needed and how they can be developed. [23]

The Scottish Community Development Centre has produced a guide to developing community capacity for co-production. [69] This highlights:

Achieving this can involve reviewing staff roles and changing human resource policies. [15] For example, appraisal procedures can be developed to support new ways of working co-productively. Managers should explore ways in which people who use services can give feedback on the staff they work with and use this in supervision and appraisal. [70]

As an example, the London Borough of Lambeth has said that staff are an essential part of its approach to co-production. It called this ‘the co-operative council sharing power’. It noted that this meant that the council needed the right approaches to recruitment and training. It included an assessment of each staff member’s ‘co-operative’ approach in their appraisals. It also introduced recognition and reward schemes to give staff further incentives to support new ways of working. [13]

There are examples of co-production being used in relation to staff issues in residential homes. This includes involving residents in developing job specifications and staff training. During the recruitment process job candidates were assessed for their ability to relate to the people they would be working with. [71]

Commissioning (the process of buying services from other organisations or people not directly employed by the commissioner) is recognised as a key part of the co-production approach. [15, 42]

For co-production to be successful, organisations need to change their systems for commissioning. This involves developing approaches that recognise the social, economic and environmental impact of commissions. [15] It also involves moving to commissioning based on outcomes rather than outputs (outcomes would describe the changes a service delivers to the lives of people, while outputs would just be the number of people helped). This can present problems for commissioners because outcomes can be difficult to measure. [41]

For commissioning to be co-productive and meet the challenges of reduced resources, it should have the following aims:

Guidance has also been produced on how local authorities can develop stronger links with the communities they serve through strategic commissioning. This includes:

There are three steps that can be used by local commissioners to support user-driven commissioning: 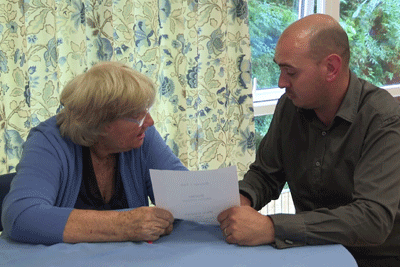 Co-production in social care: What it is and how to do it (Easy read)

Co-production in social care: What it is and how to do it (Guide)