West Midlands Co-production Network look back at their achievements since they were set up in 2011 and celebrate their 20th meeting at the MAC in Birmingham.

All in this together: A Celebration of Co-production

The Co-production Network for Wales’ major conference at the University of Wrexham with a keynote speech from a Welsh government minister.

Find out more: All in this together: A Celebration of Co-production.

Merton Centre for Independent Living celebrates its 10th anniversary of work in the south London borough.

Co-producing research: How do we do it?

A conference being held but Involve with RDS London, the Centre for Pubic Engagement (Kingston & St George's Joint Faculty ), the Centre for Co-production (University College, London) and the international journal Health Expectations to look at what makes co-production different from other approaches to user and carer involvement in research.

Making Space has co-produced this event being held at the Tower Ballroom in Blackpool for people who use their services and volunteers to celebrate their work and achievements.

Local Making Space services will be holding other events during the week.

Pledge walls across the county

Will be working throughout July to highlight co-production in their work within the Commission and the health and social care sector. They will conclude the month with a major cross-sector co-production conference on 31 July.

In this webinar we will be looking at how commissioners and communities can work successfully together to maximise the existing resources and provide the best possible outcomes for people. 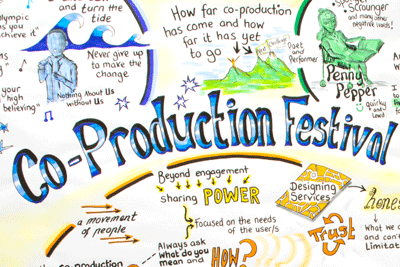 Camden Council Leader Georgia Gould on how co-production is being embraced despite the COVID-19 pandemic. Plus a range of voices on what co-production means to them
View more: News
If you are planning to hold an event, have an example to share or have any questions about National Co-production Week
LET US KNOW
Related SCIE content