New ideas for supporting carers are springing up all the time, and there is increasing recognition of the need to offer greater choice and flexibility to carers. Carers need access to good information, support and finance. They also need services that are reliable and well organised, with a stable group of well trained staff. And they may need a helping hand to link up with other carers in a similar situation.

Family and friends play a vital role in the life of a person living with dementia. The period leading up to and around a diagnosis of dementia is often a very difficult time for family and friends. Support for carers around the time of diagnosis is vital: whether this is through information leaflets, a support group or through linking up with other carers online. Becoming a carer typically involves taking on new roles, tasks and responsibilities and may involve a change in the relationship with the person with dementia.

The move to a care home or hospital is often after a crisis and not a planned development. In these times of change, carers have a vital role in smoothing the transition for the new resident. A person with dementia may be distressed at this time and this will be made worse if care staff do not have enough personal knowledge of the individual. Staff have a vital role in supporting the carer and should give permission for the family carer to remain involved as much as they want to be.

Carers for people with advanced dementia need the support of skilled care staff more than ever. The physical care needs of a person with advanced dementia are increasingly complex and demanding. Specialist staff can give advice on eating and swallowing, skin care and pain management. Communication is also increasingly complex and may depend on sensitive interpretation of non-verbal cues. Care staff can learn a lot from listening to carers: they know the person with dementia best. 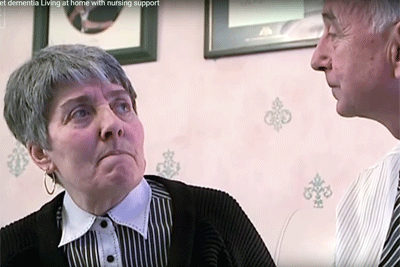 Meet Jim and Janet Swift, both keen travellers until Janet was diagnosed with dementia at the age of 58. Jim’s account of their experience illustrates the widespread effect of a very rapid deterioration, and explores the sense of loss and loneliness that can be part of the caring role.

Video: getting to know the person

Film: Each person with dementia is different. Watch a popular 17 minute SCIE film

Getting to know the person with dementia